While the COVID-19 pandemic has slowed or stopped plenty of projects across the country, a unique partnership in the South Valley is still moving forward.

The South Valley Social Enterprise Center is slated to break ground on a $4.5 million center on Isleta Boulevard SW this fall. The center is a partnership between a pair of Albuquerque nonprofits — Partnership for Community Action and Southwest Creations Collaborative — and is designed to fill a variety of roles for the community.

The heads of both organizations said the 17,360-square-foot building will function as an educational center and a manufacturing space, among other roles.

Most importantly, the center will be designed to function as a community hub, one that could spur a different approach to economic development as Albuquerque looks to recover from the economic downturn associated with the pandemic.

Both organizations had plenty to gain from the partnership. For PCA, which aims to build strong communities in the historically underserved South Valley, the goal is to help the organization become less reliant on philanthropy, according to Martínez.

“We were really wanting to build a model that’s more sustainable,” he said.

Martínez said the enterprise center will be funded through grants from the U.S.

Department of Commerce, the W.K. Kellogg Foundation and the Albuquerque Community Foundation.

Susan Matteucci, executive director of Southwest Creations Collaborative, said the organization, a social enterprise that offers contract manufacturing services to help women earn a living wage, was outgrowing its current space and was looking for a facility to house its 45 full-time employees.

“It made so much sense to partner with an organization that really has the vision of what this is beyond just being another manufacturing site,” Matteucci said.

In addition to manufacturing, Martínez said the enterprise center will offer office space and educational services for kids and adults alike. The educational services will range from daycare for youngsters to college prep work for highschool students to economic training modules for adults.

Martínez said the idea is to create a multi-generational community center that also acts as an economic hub for the region.

“We envision this as a space where people can come, create, strategize and implement, anchored by the manufacturing taking place outside,” Martínez said.

On the manufacturing side, Matteucci said the center will have dock space for loading and unloading freight. These facilities will be available for onsite small businesses to take advantage of as well.

Putting it all together, Matteucci said the goal is to create an environment where South Valley entrepreneurs can succeed and grow.

“Our idea is we can help smaller businesses figure out how to reach bigger markets,” Matteucci said.

Long term, Martínez sees this approach as a new way of approaching economic development. Rather than focusing on bringing in large, out-of-state companies, he said New Mexico could focus on building up the entrepreneurs who are already here.

“The state, for a long time, has been chasing these unicorns,” Martínez said. “This is an opportunity to reinvest in these small, local communities.”

Stephen Hamway covers economic development, healthcare and tourism for the Journal. He can be reached at shamway@abqjournal.com.

THE ECONOMY AND YOU 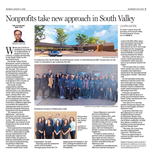