Planting for the future

The cottonwoods of the bosque are a staple of Albuquerque’s natural landscape. But the city’s other aging trees and a changing climate highlight a need to plant more trees that can withstand the city’s diverse soil, moisture levels and rising temperatures.

A group led by the Nature Conservancy evaluated more than 130 tree species to create a list of climate-ready trees.

So if you’re planting a tree, you might want to consider desert willows and think twice before planting white mulberry. New Mexico olive trees made the cut, but the invasive Siberian elm did not.

Sarah Hurteau, urban conservation director for the Nature Conservancy in New Mexico, said the yearlong project focused on selecting the right trees to plant in the right place.

“We’re really going to see a pretty significant shift in our climate over the life span that the trees we plant now will experience,” Hurteau said. “We might not see all of these changes, but the trees will.”

The group scaled down global climate models used by the United Nations. The results are sobering: Albuquerque may see a summer temperature increase of 10 to 15 degrees by 2099.

Rising temperatures are exacerbated by the urban heat island effect, created when asphalt and concrete trap heat during the day and radiate that heat at night.

Trees that are ideal for Albuquerque’s current temperatures may not thrive in a hotter future climate.

The project was funded by a National Fish and Wildlife Foundation grant. Consultants on the project included tree experts from the city of Albuquerque, the Albuquerque Bernalillo County Water Utility Authority, several New Mexico and Arizona universities, plant societies and landscape and tree businesses.

The experts aligned the climate models with the U.S. Department of Agriculture’s hardiness zones to create a guide of climate-ready trees.

Tree species are sorted based on how well they will grow in Albuquerque’s xeriscaped areas, places that collect stormwater, highly irrigated areas and even restricted green spaces in parking lots and sidewalks.

Many of Albuquerque’s mature canopy trees are at the end of their natural life span, Hurteau said.

“The guide will help you pick the tree that can fit in a space at its full mature size,” Hurteau said. “If you’re planting in a parkway strip and only have 3 feet of soil and it’s hot, you don’t want to put something that requires lots of water. But if you have a little rain garden in your front yard, you could plant a tree from a different list.”

A more diverse “urban forest” would help prevent pests and diseases from wiping out all of Albuquerque’s trees.

Andrew Lisignoli, the sales manager for Trees of Corrales, grows trees to sell to nurseries and landscape companies. Lisignoli brought five decades of tree industry experience to the project.

“Knowing which trees are ready to face climate change will help us plan for the future,” he said. “Growers need to start the production process now.”

City planners will use the guide to decide which trees to plant in parks and other green spaces.

“We have new alternatives, such as blue oak and screwbean mesquite, which will add tree diversity to our canopy,” said Joran Viers, city forester for Albuquerque.

Theresa Davis is a Report for America corps member covering water and the environment for the Albuquerque Journal. 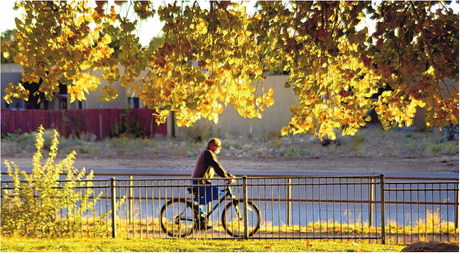