“Atomic Paradise,” the title of Jules Nyquist’s recent poetry collection, is bound to make you wonder why — and how — these two words are juxtaposed.

The juxtaposition is intentional, ironic and thought-provoking and it introduces broad commentaries on the poems inside.

The wordplay of the title, Nyquist said, led her to think about a paradise that can be the Land of Enchantment (New Mexico’s nickname) and then spin to what she said could be a land of entrapment. “(New Mexico) is a paradise in a way,” she said in a phone interview from her home in Placitas. “But with the Atomic Age, nuclear energy was to be a solution to different things — nuclear cars, nuclear planes — after World War II, then the bomb. The nuclear industry started.”

This poetry collection, Nyquist said, has taken 10 years to develop. It began to form when she was reading about the life of J.

Robert Oppenheimer, the lead Los Alamos scientist on the bomb-making Manhattan Project during World War II. One particular biography she read was “American Prometheus: The Triumph and Tragedy of J.

In Greek mythology, Prometheus stole fire from Zeus and brought it back to earth.

Nyquist’s reading of the bio spurred her to write a small set of poems that explore moments in the overlapping lives of Oppenheimer, his wife Kitty and his boss at Los Alamos, Army Gen. Leslie Groves.

One poem in the set, “Poet and Physicist,” reveals the range and depth of Oppenheimer’s intellectual pursuits. This is a quote from that poem: “Oppie is interested in everything/ he co-exists with all at once/an afternoon meeting with his students/lasts far into the night/electrodynamics, cosmic rays/ astrophysics, nuclear physics/Hindu classics, Homer and Plato read/in the original Greek …” Keep in mind that most of the poems in “Atomic Paradise” are written in free verse (meaning neither rhyme nor meter) and cover a multitude of nuclear-related topics, some clearly linked to New Mexico.

As one might expect, there’s a poem, titled “5:30 a.m.,” about the first nuclear bomb blast on July 16, 1945 in southern New Mexico: “will you cry/or laugh for joy/that determined scientists can create/such release of terror.”

Various free-ranging poems reflect Nyquist’s readings and experiences. She revisits a “Star Wars” movie in a theater, describes the nowdismantled Titan II missiles, 10 stories high in 18 underground silos, discusses the bombing of Hiroshima with her parents, refers to the internment of Japanese Americans during the war, points to a large uranium mine on Laguna Pueblo and zeros in on “uranium waste leaking out of lead drums” at the Waste Isolation Pilot Project.

Little Boy was the code name of the uranium bomb dropped on Hiroshima. In the epilogue, poems strangely veer off to present-day pandemic/COVID-19 issues.

Nyquist took the photographs in the book.

An apocalyptic-like landscape is on the front cover.

She is founder of Poetry Playhouse Publications, a publishing company, library, gallery, and a place for poetry and playwriting retreats and classes. 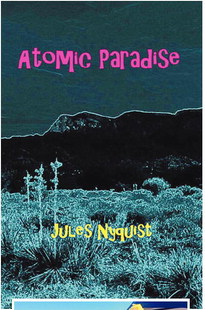